Questions about the value of investment in roads – David Metz, UCL Centre for Transport Studies The Department for Transport has begun to plan its third Road Investment Strategy (RIS3), the investment programme for the Strategic Road Network (SRN) for 2025-2030. There are a number of headwinds for road investment, in particular safety concerns from the loss of the hard shoulder of smart motorways, and the Net Zero decarbonisation objective.

There is also a question about the economic benefits of adding capacity to major roads. Recent cases of post-opening evaluation of smart motorway schemes showed gross discrepancies between traffic forecasts and projected economic benefits. The M25 Junctions 23-27 all-lane running scheme yielded reduced travel times one year after opening compared with before, but this time saving was negated by year two on account of unanticipated growth in traffic volumes. The M1 J10-13 dynamic hard shoulder running scheme generated lower speeds five years after opening compared with before, resulting in a negative benefit-cost ratio. These findings are consistent with the maxim that we can’t build our way out of congestion, which we know from experience to be generally true.

Inspection of the reports of the traffic and economic modelling of these and other road investments shows substantial projected economic benefits from travel time savings to business users. There are also time savings to local users, commuters and others, but these are entirely offset by increased vehicle operating costs – as motorists reroute to the motorway to save a few minutes travel time at the expense of increased fuel costs.

I suspect that this local rerouting is under-estimated in the traffic modelling generally. While long distance users of a motorway would be unlikely to change their route on account of local congestion, local users have the flexibility to do so. The wide adoption of ‘digital navigation’ (satnav location + digital maps + routing algorithms) that recommends shortest journey time routes increases the opportunities for local users to take advantage of increased motorway capacity. The screenshot from Google Maps illustrates the scope for rerouting of local traffic in the vicinity of the M25 J-23-27 smart motorway scheme. 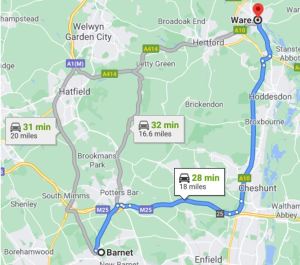 Our understanding is limited because the evaluation of the outcome of a road scheme is based on monitoring total traffic volumes and speeds, whereas the modelling estimates the benefits to different classes of road user – cars, LGVs, HGVs, business users, non-business commuters and other local users. We could well have outcomes for which total traffic was exactly as forecast but where the composition was quite different from that projected, with more local trips at nil economic benefit displacing the intended longer distance business users, resulting in poor value for money.

Because we do not understand how the composition of traffic changes after a scheme is opened, we are not able to better calibrate our models to improve future traffic forecasts.

More generally, the widespread adoption of digital navigation is changing how the road network is used. The Department for Transport has substantially revised upwards its estimates of traffic on minor roads. This is most likely due to digital navigation making minor routes accessible to those without local knowledge, with the main impact adjacent to congested major roads where a minor road offers an alternative.

The impact of digital navigation has been strangely neglected by road authorities, transport analysts, practitioners, policy makers and researchers. The providers of digital navigation are secretive about the algorithms they use and their performance. The overall effect is to increase the capacity of the road network, but at the cost of more traffic on minor roads that are well suited to active travel. The lack of liaison between providers of navigation services and road authorities means that we are missing opportunities to improve outcomes for road users while reducing environmental harms, in particular when the network is under greatest stress on account of peak traffic volumes or major incidents.

So, in preparation for RIS3, I suggest actions to be initiated to inform future investment decisions:

The roads sector needs to shift its focus from enlarging civil engineering structures to the digital management of traffic flows. Aviation exemplifies how to make best use of assets, both airlines and air traffic control optimising operations, with only exceptional additions to runway and terminal capacity

David Metz is an honorary professor at the UCL Centre for Transport Studies and will be speaking at Highways UK 2022 at the NEC in Birmingham on 2-3 November.